Skip to content
Our family trip to Northern Cyprus 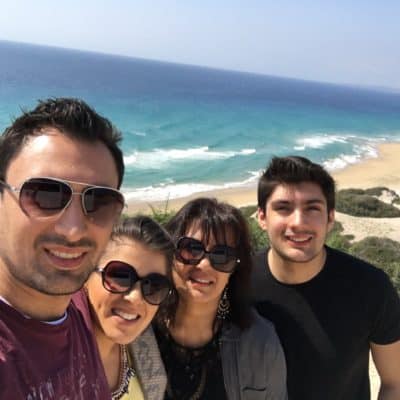 When you hear people talk about Cyprus, usually it’s the Greek side that immediately springs to mind. However, there is also the Turkish side. It is understandable that most think of the Greek side – you can only fly directly to the Greek side, it’s currency is the Euro and it is more commercially developed.
The Turkish side isn’t recognised as a nation, and so, to travel there, you must either: fly to Turkey, where the plane lands, is grounded for the minimum time needed to issue the plane with a new flight number (around 45 minutes) and then it does the short 35/40 minute journey to the northern part of Cyprus.
Or
Fly to the southern part of Cyprus (the Greek side) and then make the journey by road to the northern part.
Now although both methods sound like a bit of a convoluted journey, I can promise you that it is absolutely worth it.
An island with a rich history, means that its culture and food are rich and vibrant! Cyprus is the only country or island in Europe whose capital is divided between two nations.
Before this beautiful island was divided in two, the Greeks and the Turks lived side by side. After a painful war, the island was divided, with the north declared Turkish and the south declared Greek.
As a side note, This island’s story is remarkably similar to Punjab’s history (with Punjab divided in two during partition, which was the formation of Pakistan, and the separation of the muslims into Pakistan and the Sikhs and Hindus into India).
Due to Cyprus’ location, it has always seen foreign visitors to its shores, and this has had a huge gastronomic impact.
The other interesting fact about northern Cyprus is that, due to the fact that it is not formally recognised as a nation, it cannot export any of its produce. Meaning that Turkish Cypriots eat seasonally, and therefore, the produce is always packed with flavour and fresh.
The stunning weather means that, at every turn, you can find colourful fruit, or green crops, growing in abundance.
The island is home to the beautiful pomerance tree. Pomerance looks just like an orange, however, it is incredibly bitter (it makes wonderful marmalade). The book ‘Bitter Lemons’ by Lawrence Durrell is actually referring to pomerance, as opposed to lemons (as the book’s title would have you think). Interestingly, the branches of the pomerance tree are grafted to grow mandarins, grapefruit, kumquat and lemons – who would have ever thought?!
You do also find plenty of orange trees, lemons trees, as well as lime trees.
Cafés, coffee shops, delis and local eateries all offer freshly squeezed orange juice (which is satisfyingly always squeezed directly in front of you). They also offer pomegranate juice, which, again, is provided on a ‘just-in-time’ basis. You can also get an orange-pomegranate juice blend, which is really delicious!
On the first day exploring, our guide pointed out a small spiked bush, and said that it is known as wild artichoke (although it is not actually related to the artichoke, but it does have a large, bud-like shape in the centre).
The locals wash the spines of the leaves, roughly chop them, and mix them with yogurt to make a rustic dressed salad. Wild artichoke helps the liver, and the locals often eat this salad after a night of raki-drinking to help their liver the next day!

Following on from our rustic dressed salad, comes the story of yoghurt and how it came into our lives….

Yoghurt is a Turkish word. Yoghurt comes from a mountain region (in what was Turkey) called Caucasus. This region is now on the border between Georgia and Russia. They leave milk out overnight and in the morning it is yoghurt. The dew from the mountains contains the yeast and bacteria needed to turn the milk to yoghurt.

Olives are grown throughout northern Cyprus, and are preserved using the traditional method. This is done by arranging olives in wicker baskets in lines, alternating each line of olives with a line of salt (this draws out any bitterness whilst retaining the full flavour of the olive).
This is the tradition stone used to crush the olives (in preparation for extracting the oil).
Once the olives have been crushed under this stone, they are packed into muslin cloth bags. Once they have roughly 10 or so bags of crushed olives, they are piled one of top of the other, and they are then pressed down. This first press is known as extra virgin olive oil.
Once the first press has been done, they ten run hot water through the sacks and put them back under, to be pressed again. This second press (which is slightly watered down) is, what we know as, regular olive oil.
The extra virgin olive oil is used for dressings and the regular olive oil is used in cooking.
I noticed several clay ovens, which look similar to a tandoor (the Indian clay ovens used to cook meats and breads). The Cypriot clay ovens are called Kleftiko. They cook meat in these ovens (often lamb). They seal the meat in the kleftiko and it slow cooks for 24 hours, giving incredibly tender and flavoursome meat.
We stopped for a quick break one afternoon at, what looked like, a little cafe, but it was so much more than that! They were making fresh, hot, stuffed lavash bread! Lavash is a flatbread, which can also be stuffed. Traditional filling are spinach and cheese (often halloumi) or spiced lamb mince, they also offer a spiced potato filling (which I’m told is not a traditional filling, but it was delicious all the same!). I watched with fascination as they make lavash after lavash and hung around hoping to keep watching their technique, so that I could try to replicate it back home. However, when the lady noticed my interest and enthusiasm she lifted her rolling pin and handed to me, inviting me round to roll them out with her (I won’t lie, as a cook myself, I felt that was a huge honour to be offered to cook with this lavash making pro!). Now, all our cookery school alumni will revel in knowing that, I actually found this quite tricky! The method for rolling out the lavash bread uses the opposite method to that for making roti (Indian wholewheat flatbreads), so it felt like I was going against everything I’ve been trained to do, but it was great fun! For all our students who would like to witness me, not quite getting the hang of it, here’s a little video evidence, courtesy of my co-teacher and Mum!
The stuffed lamb lavash was absolutely delicious, and was our favourite dish of the entire trip!