Music and dance holds a special place in mine and my family’s heart. My maternal grandfather always wanted to be a singer, however, due to his family not allowing him to pursue this avenue, he never became a professional Indian singer. My mother always told us about how she can remember her late father singing to Indian classics in their front room when she was a child and how much joy he got from singing. This love of music, and anything connected to music (dance) was passed onto my mother, and she in turn passed that love and appreciation onto myself and my two brothers.

A few weeks ago family friend of ours, who appreciates all forms of classical music, told us that the internationally renowned sarod player, Amjad Ali Khan, was playing at Turner Sims in Southampton at the beginning of February. As soon as he told us, our tickets were booked!

The sarod is a classical Indian instrument, which is similar to a lute. The sarod player strums the strings with their right hand and with their left hand, run the tip of their finger down the string, which creates the most beautiful sound. 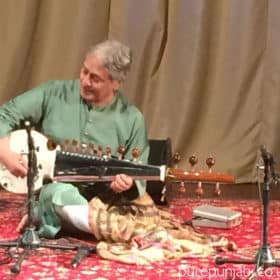 Now, for those who have not come across Amjad Ali Khan and his work, you have been missing out on such a hugely talented artist. Just to add a bit of context…he is the sixth generation of an illustrious Bangash lineage and a renowned maestro in classical Indian music. In 2001 he was awarded the Padma Vibhushan, one of the highest Indian civilian awards.

He, and his equally skilled sons, Amaan and Ayaan Ali Khan, performed at the 2014 Nobel Peace Prize ceremony. And if all of that doesn’t mean anything, to gain an idea of the level of their achievements, you simply need to check out their Instagram accounts, where you will see them with Bollywood royalty such as Abhishek Bachchan and Priyanka Chopra…world leaders such as Mr Narendra Modi and Dr. Manmohan Singh…Hollywood stars such Queen Latifah and Aerosmith’s Steven Tyler. 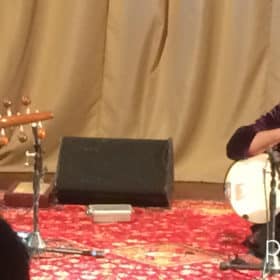 Amjad, Amaan and Ayaan were accompanied by a tabla player (this is an Indian drum). The tablas are classical Indian drums, the smaller drum is called ‘dayan’ and the larger one is called ‘bayan’. They are played together, and occasionally the ‘bayan’ can be played on its own. Both tablas sit on rings, called a ‘bira’. The top section is made of leather (usually goat’s skin) and the body of the tablas have dowels around them, which are fastened in place with leather straps. As the tabla player performs, the dowels can shift position, so they re-tune their instrument by tapping the dowels to move them till the desired sound is achieved. The tablas are played by striking the top with your finger tips, palm and heal of your hand.

The tabla player that accopanied the famous trio was non other than Tanmoy Bose. Again, just to give a bit of context, Tanmoy Bose frequently performed with Sitar legend (and father of Jazz singer Norah Jones) Ravi Shankar. After learning about this unbelievably talented line-up, can you see why we couldn’t wait a single second to book our tickets?! 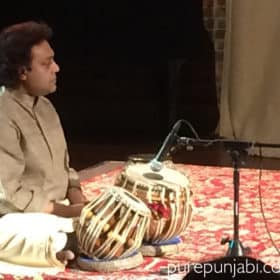 The evening was broken down into 3 sections. The show was opened by Amjad and Tanmoy, and they explained how the cold weather (and on this day snowy!) affects the instruments and the sound they produce. Both the sarod and the tablas have sections that are made from leather, so the cold changes the way the material behaves, and ultimately, the sound their instruments produce. They both began playing the ‘ragas’ – this the name for one of the melodic modes in Indian classical music. In ragas, the melody is made of 5 or more notes. Here’s a clip of their performance…

Amjad then started to sing ‘ghazals’. These are beautiful rhyming couplets that are sung, and are the Indian equivalent of singing in scales. The parent scale follows the structure of: Sa Re Ga Ma Pa Dha Ni Sa (this is the Indian version of: doh ray me far so la te doh). If you like to listen to Indian classical music, you’ll notice how much this parent scale is used in so many songs.

During the break, I quickly made a visit to the ladies. Whilst I was waiting in line, the lady in front of me (who was English) complimented me on my earrings. After thanking her, I asked her if she had always liked Indian classical music. She paused briefly, with a pensive look cross her face, she replied “I like anything that’s done well”. I thought her answer was genius – amen to that!

After the interval, Amjad’s sons, Amaan (eldest) and Ayaan (youngest) performed with Tanmoy. Before they started their performance, they took a few moments to introduce a young London-based rapper Emily Anne (in the audience), with whom they performed at the 2014 Nobel Peace Prize ceremony. Her song ‘I am Malala’, which she performed at the star-studded Nobel Peace Prize ceremony in Oslo, recently went to number one in the Norwegian charts. Any cause that celebrates the education and empowerment of women gets our whole-hearted support! We ran into Emily and her mother at the end of the night, and congratulated her on her inspiring achievements. I said to her mother “you must be so proud” she replied “oh, like you can’t believe” – and so she should be!

After introducing Emily Anne, they began playing. This part felt like three musician jammin’! They all vibed off each other and there was such a great section within their performance where both the brothers did a sort of ‘music-off’ with Tanmoy – seeing how fast they could each play and keep up with each other. It was so funny, but, most importantly, highlighted just how skilled they all are to play at such a speed!

The entire night was absolutely stunning, from start to finish. The pure talent of all four musicians was just breathtaking and what made their performances even more fantastic was their relationships. It was plain to see how much they not only loved playing their instruments, but how much they enjoyed working with one another. They were so comfortable together that their little looks to one another or the way in which they challenged each other with smile completely drew you in. They made you feel like you had been let into the most top secret, private and sought-after performance, with moments of freestyling and vibing off each other. It was as though they had known each other and been playing together in a previous life. It was a pleasure to watch and I and my family would like to thank Amjad Ali Khan, Amaan Ali Khan, Ayaan Ali Khan and Tanmoy Bose for a superb evening that will remain in our fondest of memories. 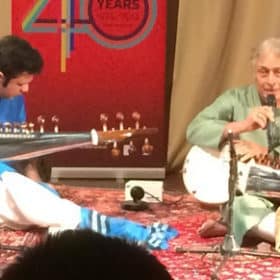 After the show had finished and the room started to empty, Tanmoy Bose re-appeared to pack away his tablas. The evening was so spectacular and seeing him there, I decided I couldn’t let the opportunity to speak to him slip away.

It’s always a slightly nerve-racking and tense moment when you are about to approach someone you admire…what if they turn around and shatter your dreams by not giving a damn?! Well, I needn’t have worried. The moment I said hello, he looked up with a kind smile and listened intently as I expressed just how incredible and inspiring the night was. As we were about to take a picture, I told him that it was my mother’s birthday, and straight away he picked up one of his tablas and asked her if she would like to hold it in the picture. Thank you Mr Tanmoy Bose for your kindness, it was the perfect end to an outstanding evening… 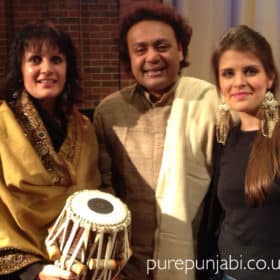 For more information about Turner Sims and events held there, click here.

For more information about Emily Anne Music (including her performance in Oslo), click here.