All meal kit products are on backorder for January. Orders will be dispatched from the latter half of January. Dismiss

How to make ghee

I was taught how to make ghee, as a young girl, by my mother.  When it was time to make ghee, my mother would send me to the local shop to collect the case of New Zealand Anchor butter that she had ordered.  I’m sure that the staff at the shop always wondered what on earth we were doing with all these blocks of butter!

When I got home, we would unwrap the blocks of butter, (it must have been about 24 blocks in a wholesale case).  We always made sure that we scraped every bit of butter off the wrappers, as there was no waste!

The blocks would go into a huge blue saucepan that my mother only used for ghee and dessert-making.  She would turn on the electric ring of our cooker and slowly the butter would start to melt.  It was a slow, unhurried process and we would watch as the butter slowly became liquid and then gently started heating up and begin to bubble and splutter.

This process would continue for a while, until we would see froth appearing on the top of the liquid butter.  As more froth appeared, my mother would carefully tip the saucepan, and skim off the froth, telling me to stand well back while she did this.

Eventually, when there was no more froth on the top of the liquid, she would turn off the cooker and leave the hot ghee to cool. We would always be doing other jobs in the kitchen and checking when the ghee would be cool enough to pour into containers.  My mother kept large 5-litre empty containers of Walls Vanilla ice cream, that she had washed out, to keep for storing all her home-made produce. (We had a guest house, so jelly and ice-cream was a regular dessert on the English menu).  She would then carefully pour the golden liquid into the tubs, being careful not to pour in any of the sediment that was at the bottom of the saucepan.

The sediment she discarded.  I wonder now, if there might have been another use for it?  Had we been in the villages of Punjab, maybe it would have been used in animal feed?  As it was, living in Southsea, she couldn’t have had another use for it, as nothing was ever thrown away!

During the 70’s or 80’s tins of Ghee started to become readily available in Asian supermarkets, and eventually we started to buy it.  It is one of the few products that we do think is acceptable to use ready-made.

This is using one block of cow’s butter in a small saucepan, that has been quartered, for faster melting. 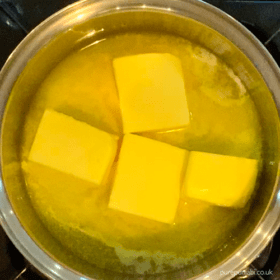 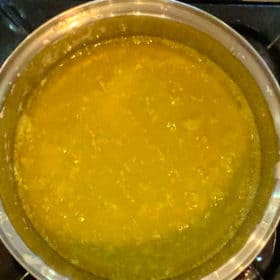 Slowly heat up the butter o a medium heat, until melted and gently simmering. It will splutter, so make sure that the saucepan is high-sided. 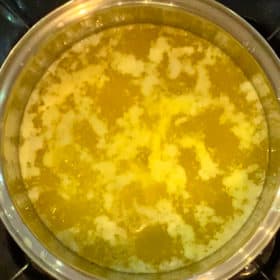 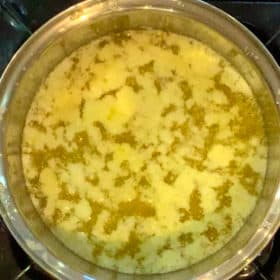 Eventually an increasing amount of froth will appear on the top as the butter starts to separate. 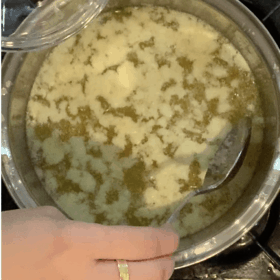 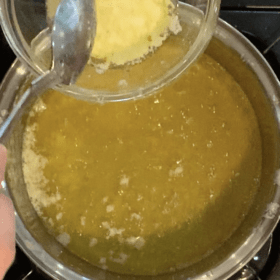 When there is enough froth forming, start to skim it off into a bowl, to be discarded. keep skimming until you have removed all of the froth.  DON’T pour it down the sink.  Usually it can be put into kitchen paper and disposed off with food waste. 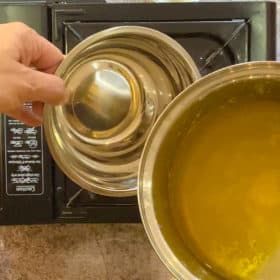 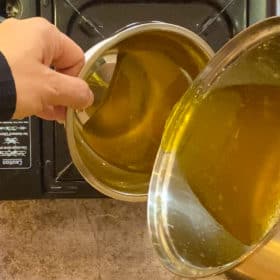 Now carefully pour the liquid ghee into a container or ideally a tub with a fitted cover. 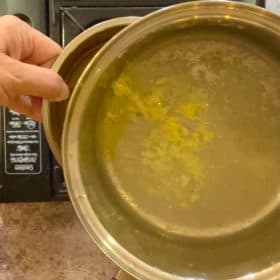 There is sediment at the bottom of the saucepan, so you should be careful not to pour this into the tub of ghee. When you have poured off all of the ghee, discard the sediment. This can also be wiped up with kitchen paper and thrown away again with food waste. Again – DO NOT pour down the sink. 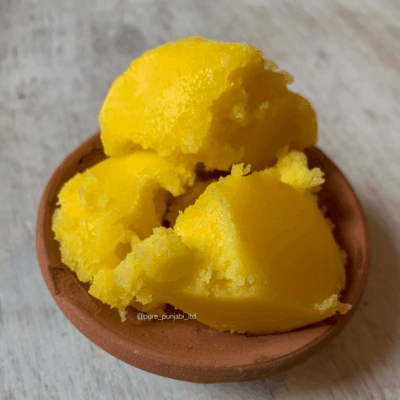 As the ghee becomes cold it will start to set, but will remain soft at room temperature. It can be stored at room temperature, and will have a soft-set consistency.  However, like butter it will last much longer if kept in the fridge, where it will set solid. 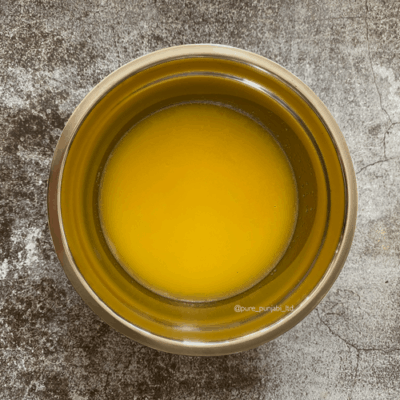 Ghee is widely used in all sorts of Indian cookery.  We do not use large amounts in our own cookery and always err on the side of good health.

The only time we use it generously is when making Parathas, which are an occasional ‘treat’ bread.   We use it to shallow fry them, which is essential for making a delicous crispy Paratha.

Here’s a ‘how to’, for this tasty treat..perfect as Sunday Brunch with Indian Scrambled eggs

A step-by-step guide: How to make paratha from scratch

2 thoughts on “How to make ghee”