Punjab is known as ‘The bread basket of India’ due to the vast amount of crops grown in this rural area, which provides 80% of India’s produce.

As the master region of breads, roti (also known as chapatti) is the daily bread that accompanies each meal. It is so essential to our diet that the word ‘roti’ is also the word for ‘food’ in general in Punjabi! You will of hear people say “would you like roti?” meaning “would you like dinner”.

Making roti is an art, and one that is perfected over time. The saying ‘practice makes perfect’ was invented for learning how to make roti. There’s no need to feel intimidated by this, it just requires a little commitment, but it is impressive when you can make them perfectly!

So, to help you along the way, we’ve put together this step-by-step picture guide for you to look at when making roti, to break each step down…

NOTE:  This is like a French baguette – there is no preservative in the dough and the dough is always made fresh each day and Rotis are served fresh for each meal.

A step-by-step guide: How to make roti (chapattis) from scratch

2. After the second kneading, take a piece of dough that is approximately the size of a satsuma. And start rolling it into smooth circle.

3. You want to create a small dimple on one side. This round of dough is called a ‘pera’ (pronounced pear-rah)

Roll the pera (dough ball) in some of the atta (flour)

4. Flatten the pera (dough ball) on each side

5. Take the flattened pera (dough ball) and further flatten it by pressing it between the palm of your right hand and the fingers of your left hand. This will also make the pera bigger in preparation for being rolled out.

6. Roll out the flattened pera to roughly the size of a side plate, ensuring that you turn the flattened disc often and apply even pressure when rolling to give a round shape! As you roll out, if the roti is sticking, dip both sides in the flour, but you must shake off the excess flour. You need just enough flour to prevent sticking but never too much as you will have a hard, dry roti when you cook it.

7. Take the rolled out disc and firmly pass the disc from one hand to another. This helps to shake off any excess flour and make the disc a fraction bigger. Pass it back and forth roughly 10 times. This move is not a throw of the roti from hand to hand. The hands stay very close and it is almost a slapping movement.

9. The moment you can see the dough cooking, (some colour change), turn the roti over. It’s important not to over cook the first side, so this will be around 10 seconds – fairly quick! Look for the colour change…rather than count seconds (a guideline). As you can see from the picture below, the first side does not have any brown spots on it

10.The second side stays on the heat until you have a number of brown spots.

11. Once the second side is cooked (like you see in the picture below) remove it from the heat. You will now finish cooking the first side.

12. To finish cooking the first side, you apply fierce heat to it. If you have an electric hob/cooker, put the first side of the roti (spotty side faces down), under the grill (it needs to be on the highest temperature) and again, it will puff like a balloon…

If you have a gas hob/cooker, this is done by placing the first side of the roti directly over a lower flame, (spotty side faces up). The roti will then puff like a balloon! (See below for images of roti puffing over gas flame on our Indian experience Cookery workshops).  As soon as it is puffed, remove it from the grill or flame.  Do not let the underside brown.

Keep practicing and do share any pictures or videos of rotis that you’ve made, using the hashtag #PPCookerySchool

Good luck and enjoy making them!

Roti is traditionally served with dhal. 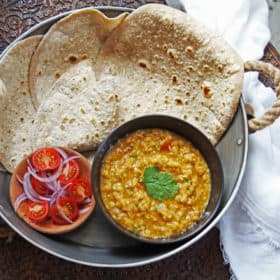 We also have a very traditional and rarely seen corn chapatti – Makki di roti, which is always served with Saag.

Roti puffed over a flame at our ‘Indian Experience’ cookery workshop, where we teach in the way that we learned from our mothers. 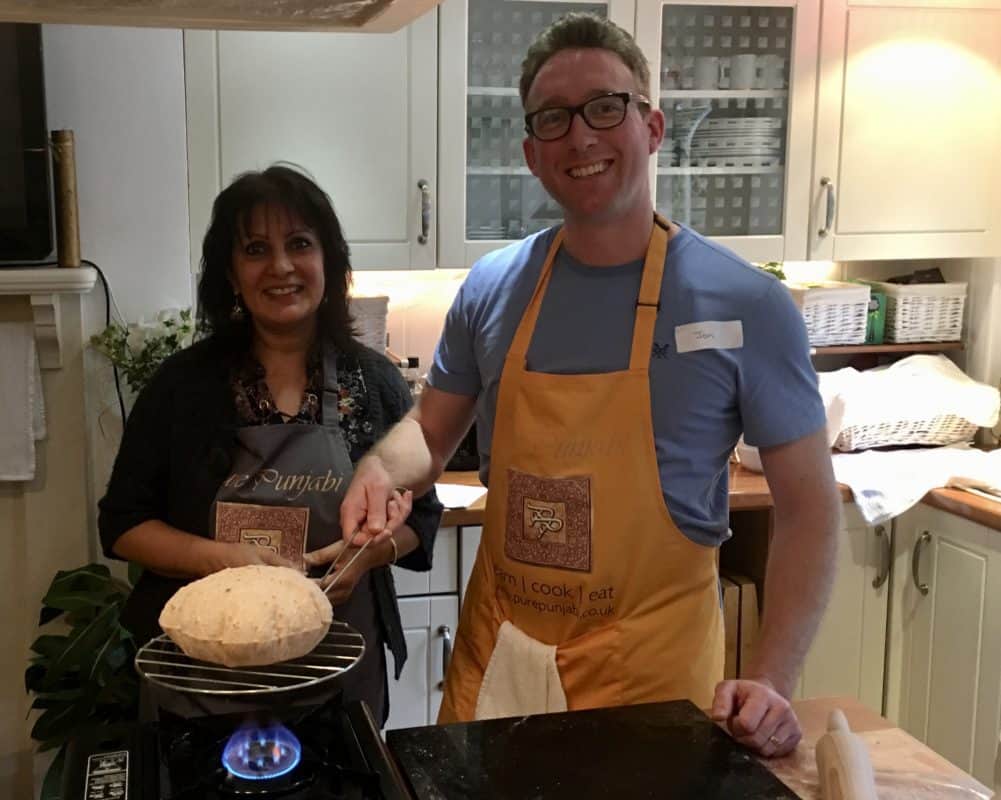 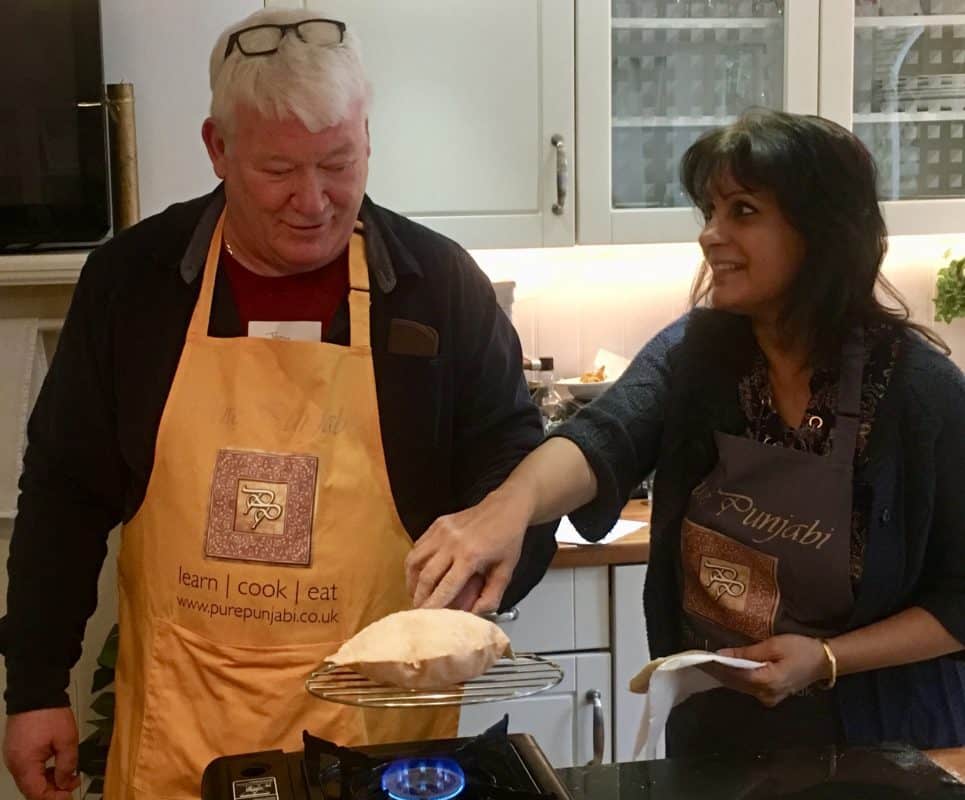 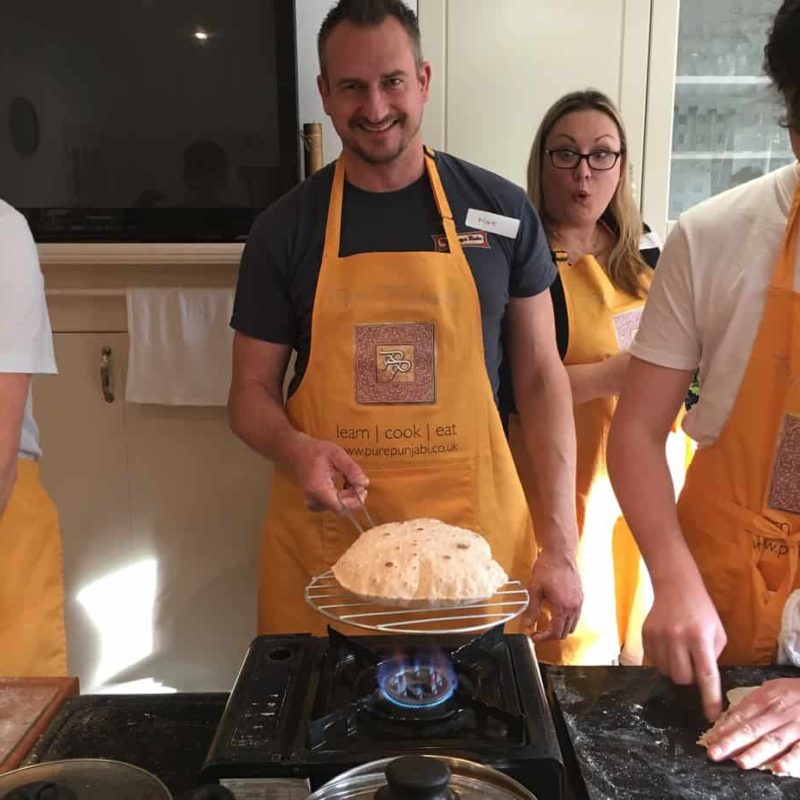 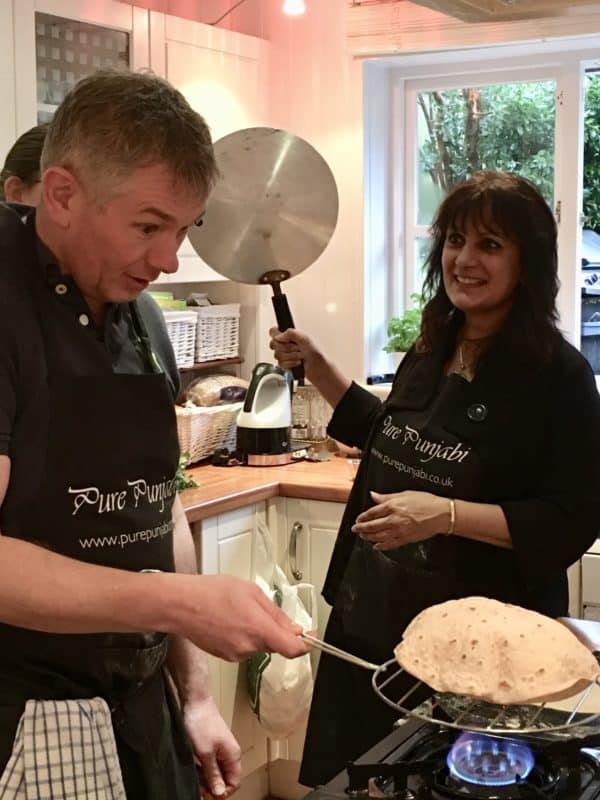 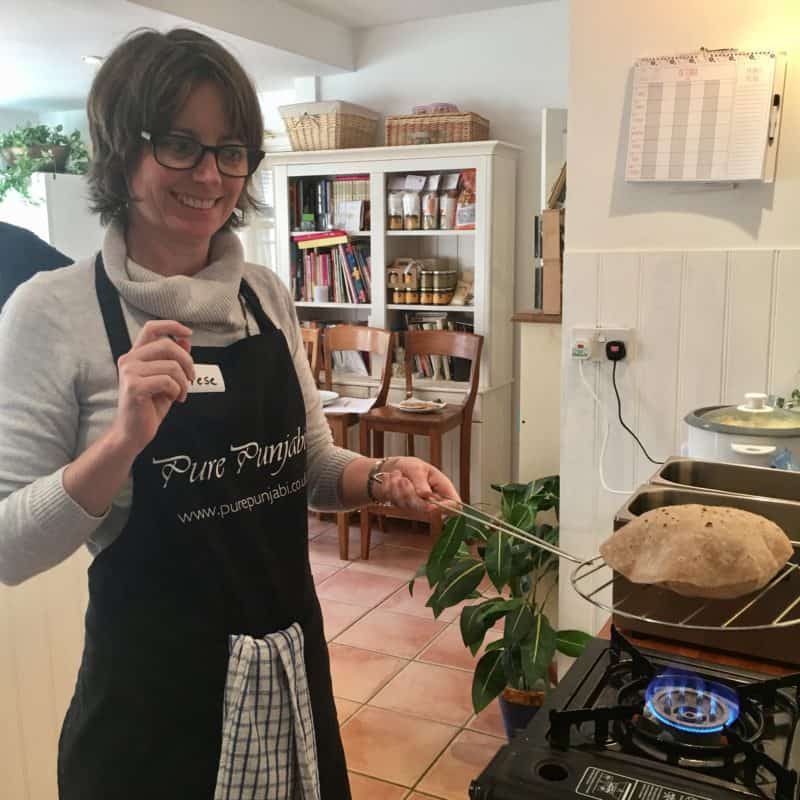 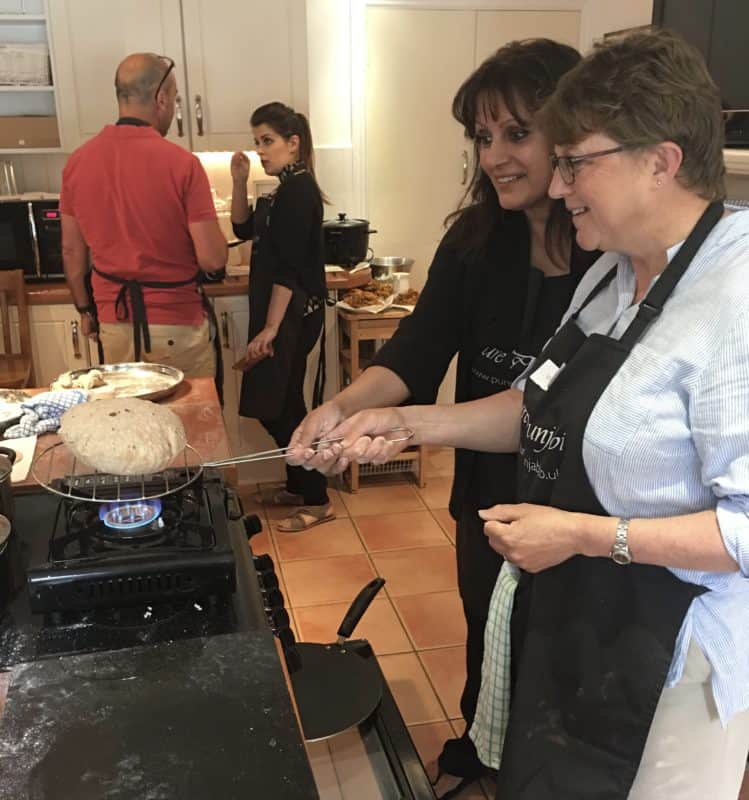 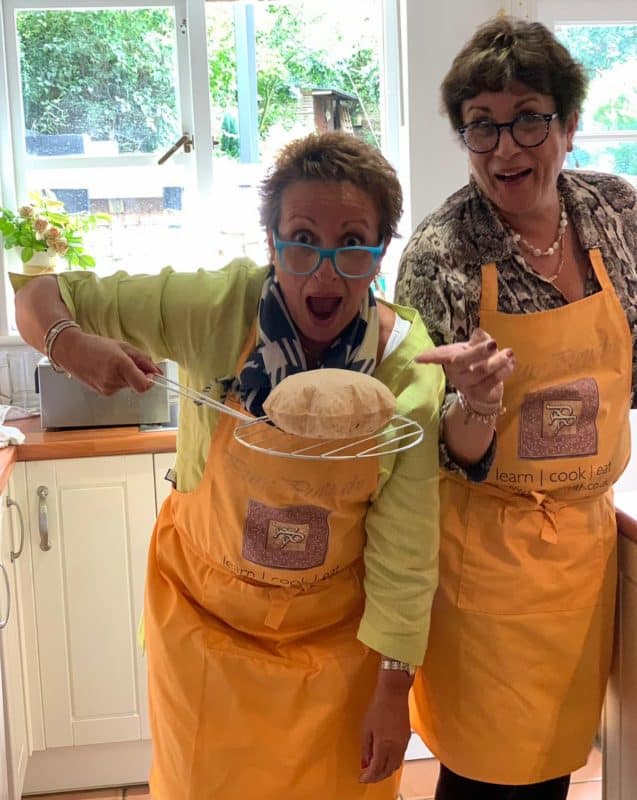 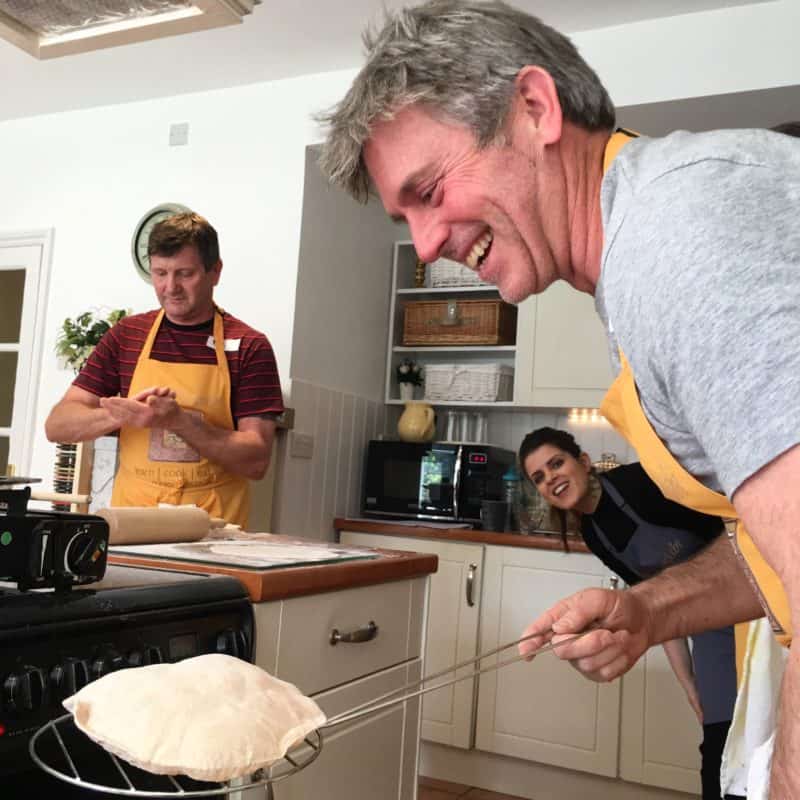 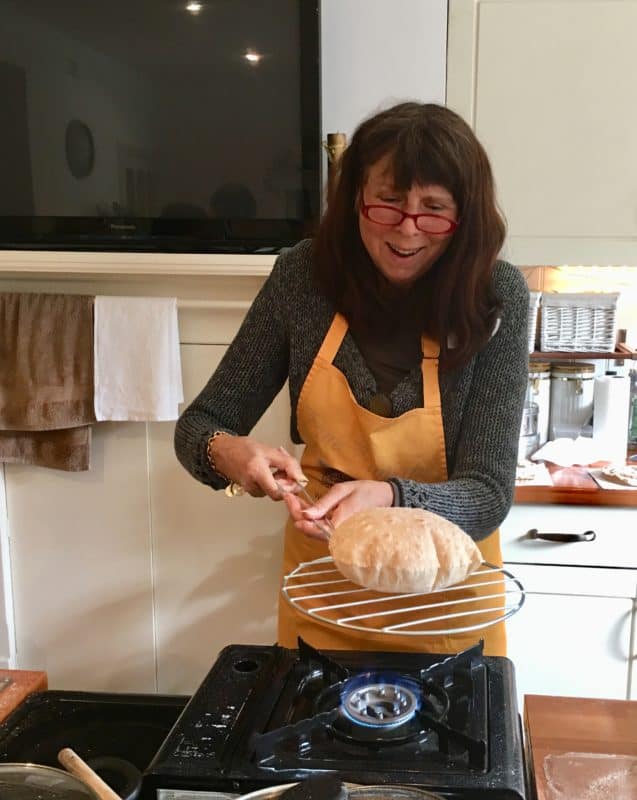 If you’d like to learn how to make traditional Punjabi food in the way that the mother teaches the daughter, then take a look at our Indian Experience full day cookery workshop, held 6 miles south of Salisbury, on the edge of the New Forest. Click HERE for details.

To learn about the other types of Punjabi bread, take a look at our Bread-making & Tasting Experience workshop, which teaches Paratha, Puri and Naan bread. Click HERE for details.

To try making paratha yourself, take a look at our step-by-step post

A step-by-step guide: How to make paratha from scratch